Solana Rivas has been out on the road touring for over a decade now and has traveled all over the world with Beirut, The Faint, and Fischerspooner, to name just a few. We caught up with Solana recently at the Riviera Theatre here in Chicago on one of Animal Collective’s stops on their Fall tour. 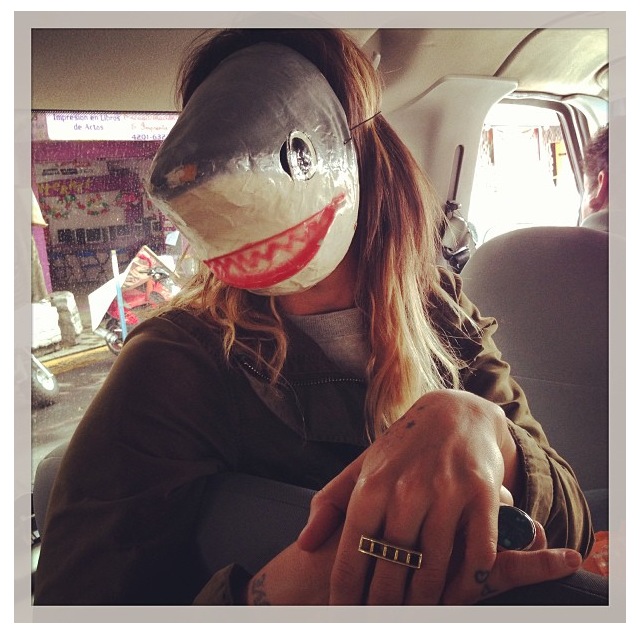 How long have you been a tour manager? How did you get your start?

I have been tour managing since 2007 and touring seriously since 2001. I started by accident with the Yeah Yeah Yeah’s, who were old friends of mine from New York. They invited me on the road in Europe while I was living in Paris, during one of their first few tours from the Fever to Tell album. What started as a fun trip with friends to help sell t-shirts and load gear, turned into a 3-year gig and what I would now call my career.

Who have you worked with in the past?

I have been very lucky to work with incredible and super-opposite ends of the spectrum, artists such as The Yeah Yeah Yeahs, The Faint, Fischerspooner, Beirut, CSS, Simian Mobile Disco, Animal Collective & many more…

What’s the best venue to play in?

Hands down, The 9:30 Club in Washington DC. They are just so welcoming and they have a really hardworking crew. I also really love the Fox Theatre in Oakland. But, that said, there some really incredible venues spread across America that go the extra mile for bands and that really helps you feel relaxed. As a tour or production manager, you know that you don’t have to worry about your day when you are pulling up to those places.

What’s the best city to have a day off in, besides Chicago of course?

Ha ha! Well, Chicago is pretty sweet…But my favorite days off are usually the ones in the middle of America. I am a sucker for the all American kitsch factor so I love stopping in those little mom and pop towns. Either that or some sweet nature spot in the desert or a national park. I was just out with Animal Collective and we had a day off in Amarillo, Texas. We went to eat at a steakhouse that looks like it is from another era. They have a 72 oz. steak eating contest that is just so nasty and so American. Another great stop is White Sands desert. Tour buses can drive there and you can plan a day off in the incredible white dunes of New Mexico.

What do you think of Miley Cyrus?

Honestly…I have had so many conversations about her over the last couple months, and I feel like she is just figuring her shit out. Imagine being sold out to the Mickey Mouse Club and then becoming a tween millionare. I am sure she is just trying to find herself at this point in her life and maybe twerking and “molly” are just part of the way the super rich young stars are doing this. I don’t really have an opinion about her twerking or drug use. She seems to be smart enough to pull her head out of her ass at some point either way. That said, I actually really like her two current singles “Wrecking Ball” & “We can’t stop” from her Bangerz album they are great pop songs that reflect what pop music is right now in the year 2013.

What the best advice you can give to a tour manager just starting out?

Being a tour manager is a demanding, hard job that takes a lot of multitasking and organization skills. I think it’s really important to make the band feel like they are being taken care of on a level that doesn’t make them feel like they are being singled out as needy. As a tour manager, you should just do this and it should be a really smooth everyday thing that makes people feel they can trust you and rely on you. Besides that, it is really important to be calm, relaxed, and good at accounting!!

Who’s your mentor in the business?

Gabriel Gonzalez. Best dude ever. He always believed I should be doing what I do now. He really pushed me into making this into a career. He is also the guy who got me into using Master Tour. I think I was the 1600th user… Just sayin’.

What was the first tour that you used Master Tour on?

First tour I used Master Tour on was with The Faint in 2007. But I had been on tours that were just starting to use it before that. I have to say, I have been a big fan since the beginning. Even when it was all PC-looking and not as Apple friendly, It is such a genius program for the job all of us on the road are doing. It makes life WAY easier and streamlines things like accounting, tour books etc. and nowadays it has improved 200 fold! I am looking forward to more updates and more improvements.

What feature do you use the most on Master Tour?

Itinerary/Tourbooks, Guest List, etc. Although I would love to start getting into using the accounting section more often and John recently came to se me in Chicago and showed me how to make customized day sheets and add logos so that is exciting. I also just started toying around with the set lists section. I will use this more often on my future tours as well.

Which features do you want to see the most in Master Tour?

I would love to have a merchandise section. It is really the only thing missing from the program from a tour managers point of view. If there was an organized streamlined section for nightly merchandise reports, then band managers could easily log onto the program and see nightly updates, on merchandise, accounting etc. This would save for the hassle of sending this all out after shows every night. Next step would be convincing managers to all use the program 😉

How is the touring business now, compared to 10 years ago?

Oh man, well I think the touring industry has changed SO much even since the mid 2000s it has gotten way more hands on, professional and serious. Not to say it wasn’t before, but all the big changes with major labels or labels in general and the way the music industry does things now compared to the 80s and 90s…I mean, let’s be honest, no one is throwing money around, bands are not really selling records, and tour has become crucial to making serious money as a band. Besides working your ass off as a band and putting on a superb live show, a big part of being on the road now is having a kick ass crew that you can trust 🙂 I think bands are smarting up about touring, management, and money managing. Bands are having to sort of take a step back and see the industry as a whole and analyze what will work best for them and where they want to take their music (as far as it being a career) and still maintaining their style and artistic creativity.