I Was on the Kid Rock Cruise

MY EXPERIENCE WITH 3,000 CAPTIVE FANS ON A CRUISE BOAT

Those in the music industry looking for ways to better connect with fans and make events experiential need to look no farther than a relatively normal cruise ship docked out of Miami last weekend. Add 3,000 crazy, captive fans out on a boat in the  Caribbean with a lineup including Kid Rock, Uncle Kracker and Yelawolf and the word “experience” becomes a incomplete description for what I saw in four days.

This past weekend I boarded the Kid Rock Chillin’ the Most Cruise with a group of friends & family including my father (who yes, is a huge fan of Mr. Robert James Ritchie). The cruise was put on by Sixthman, a company that specializes in producing theme cruises for music and fan communities.

The entertainment included a mix of Rock, Country, Rap, Southern Rock and DJ’s – hand picked by Kid Rock. Besides live music there was all kinds of fun activities featuring the artists engaging with fans on a more personal level. Some of these activities included bingo, artist Q & A, trivia, and themed parties.

We cruised out of Miami on Thursday while entertained with a late afternoon sail away cruise concert. The energy was incredible. All the people made it feel so alive with 3,000 fans cheering, dancing, drinking and enjoying the sunshine while live music played and set sail from Miami to a private island, Half Moon Cay. 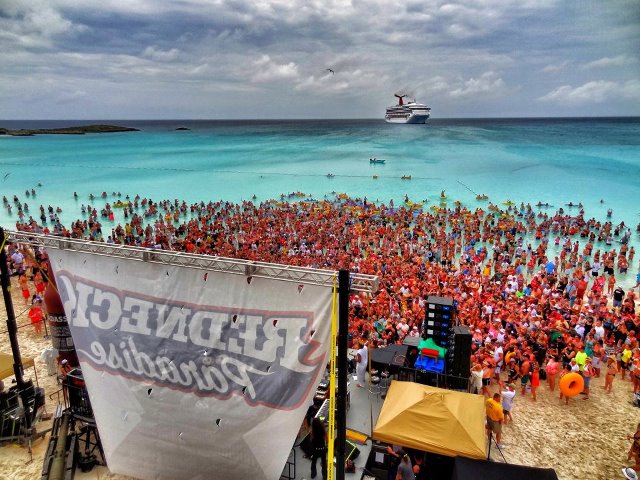 After the boat started cruising, people began chatting and making friends with other fans talking about the artists, what shows they were going to attend, eating together and meeting up for drinks. This was a much different experience than going to a show or attending a festival – 3,000 people stuck on a boat by choice for live music?

My favorite part of the entire trip was the concert on the beach at Half Moon Cay. Everyone was jamming in the soft sand and blue ocean while Kid Rock played for 2 longs hours while recording his new video, “Redneck Paradise” (it was). I even saw an 82 year old woman dancing and enjoying the festivities! 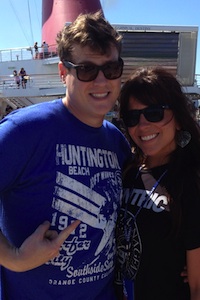 I attended almost every show getting to know some new music and some of our Master Tour clients. I met Chris Stela (Brooklyn) Tour
Manager of Yelawolf (pictured), John DiCapua FOH of John Eddie, Sam Wood Tour Manager of Ty Stone and Scott Macdonald, Tour Manager
of Uncle Kracker. I also spent time with the crew and artists enjoying what we all love… music! I’m sure those on the boat
enjoy different styles of music, but there was so much support by everyone there going to shows and taking advantage of seeing
new bands and music they weren’t familiar with.

The fan cruise is a great concept and Sixthman and Kid Rock really did everything to make sure everyone had a good time and more
importantly – would never forget the experience. I’ll be back!